When moving Vetrotech production from Aachen to Würselen, A+W implemented one of the most demanding software projects in its company history. Would it work? New hall, highly automated new machines, new software? 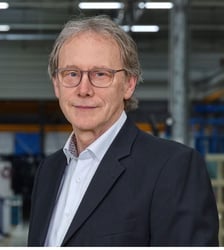 Guido Plum, Operational Director von Vetrotech: "The construction of automated production in Würselen was a challenge for all participants, for what we were planning had never been done in the 20-year partnership between Saint Gobain and A+W. For the software, we relied on A+W, even though we knew that a brand-new system would be used – fair and successful cooperation on a level playing field across 2 decades and A+W's sophisticated SmartFactory concept made the decision easy for us."

For the first time, multi-level production with backward planning is controlled by intelligent software throughout – without paper, lists, and long routes to travel – based on an A+W patent with an automatic sorter before and after the tempering furnace. Even now, the new system ensures faster throughput times, which is especially clear on the TPS insulated glass line, in LAMI production, and on the tempering furnace. 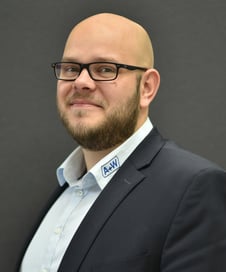 Dennis Tiegs, COO A+W Clarity: "The special thing about A+W SmartFactory is the scalable deployment, which helps the smaller operations to become large and the large operations to automate further! The advantage of the lean production approach is taken here right from the start."

A+W SmartFactory is the top-level production system that coordinates the process flows for an optimized glass flow. The system is in a position to responsively control all coupled machines and software modules with the production data provided. Machines communicate constantly with the system via so-called A+W SmartFactory clients; this enables the control of machine status and machine capacity.

According to the principle of backward scheduling, the dispatch requirements and thus ultimately customers control the production sequence. Planning is done in real time and can be adjusted at any time in the future if this should be necessary for rush orders, capacity bottlenecks, machine failures, etc.

The intelligence required for this lies only in the software that controls the communication between machines, and also between machines and human beings: a new industry standard on the path to Industry 4.0, which is optimized constantly by the expertise that flows from our pilot customers.

The implementation phase went very well thanks not least to the engaged commitment of the Vetrotech project group. With enormous efficiency, they tackled the project together with the A+W planners, bringing it to a successful conclusion. 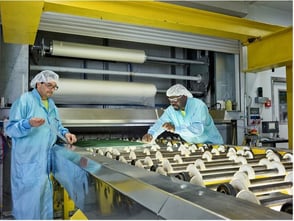 The performance of the LAMI production has increased significantly thanks to the use of software-controlled sorters: practical effets of clever automation.

Guido Plum comments: "Despite the problems that are inevitable in such projects, the implementation phase created a win-win situation. We got to know the new software in great detail – our compliments to our colleagues at A+W, who helped with the project on-site! At the same time, we were able to shape and improve A+W SmartFactory with our specialized knowledge from the very beginning – to the benefit of both sides."

Less-automated companies: the Osby Glas project
If there are no possibilities for direct machine communication, A+W SmartFactory clients function as imitation machines that can determine status and capacity per machine thanks to the integrated plant data collection. A control center provides the production manager and the general management with a wide variety of information from A+W SmartFactory, and if necessary, allows them to intervene directly in production, e.g. with the manual adjustment of production chains.

This way, even less-automated companies can profit from this development. First and foremost, in such production facilities, A+W SmartFactory regulates employees' activities and informs in real time about necessary production steps and changes to the production process. Here too, precisely that is produced what is needed first in dispatch; rush orders are integrated without a problem, WIP (work in process) is reduced a great deal.

The Swedish insulated glass manufacturer Osby Glas pilotes this variant of A+W SmartFactory, which eliminates paper in production and guarantees shorter delivery times. Joel Rosenqvist, CEO of Osby Glas: "We have been working with our software partner A+W for many years. In this time, we have worked together to implement many innovations that have made our processes better and better. That's why we're happy to pilot the new production software A+W SmartFactory and we believe that it can make Osby Glas still more successful. We're proud to be able to use our knowledge and experience to contribute to the enhancement and continuous improvement of this software." 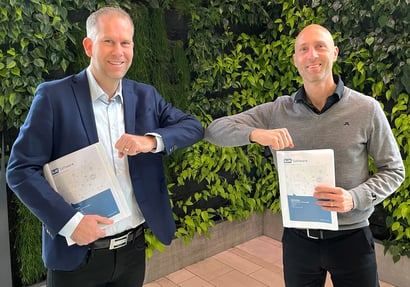